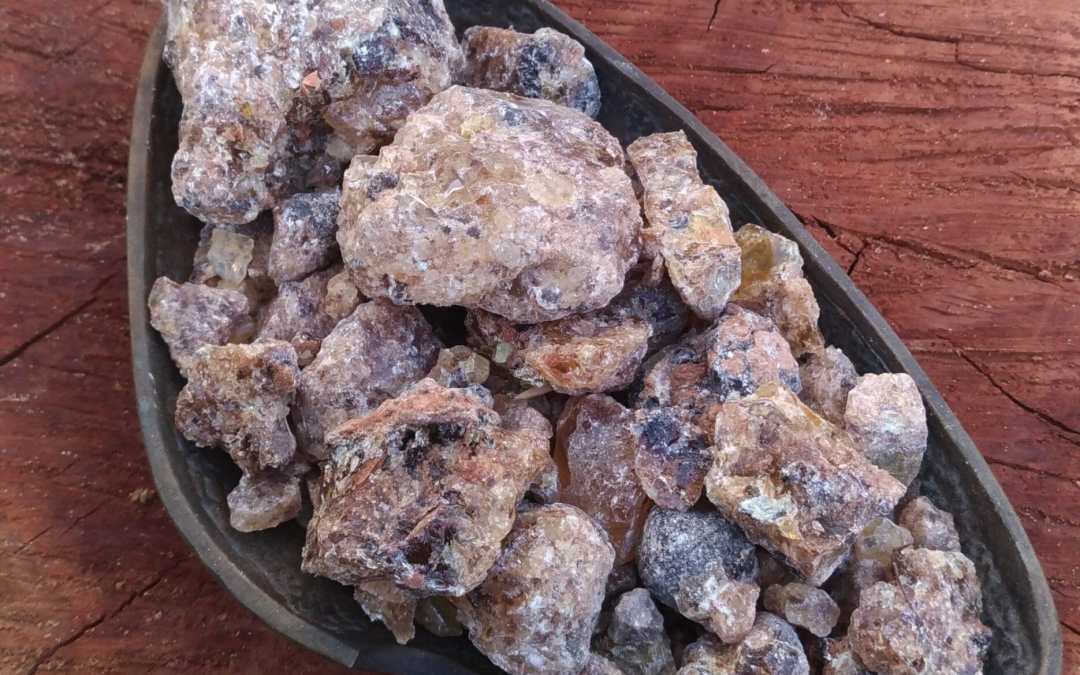 I usually don’t post shop listings on the blog and make an effort to keep the sales pitch to a bare minimum here. However,  there is a lot of important information in this particular shop listing and I don’t want to write it all again for the blog. Not so much lazy as I seem to have less and less time for some reason.

Many blog readers still ask me if I have a shop where they can buy the Frankincense products I write about, so I will take this as an opportunity to be more overt about it.

It is full of beautiful, sustainably sourced, high quality fragrant and healing stuff. Buy it here! 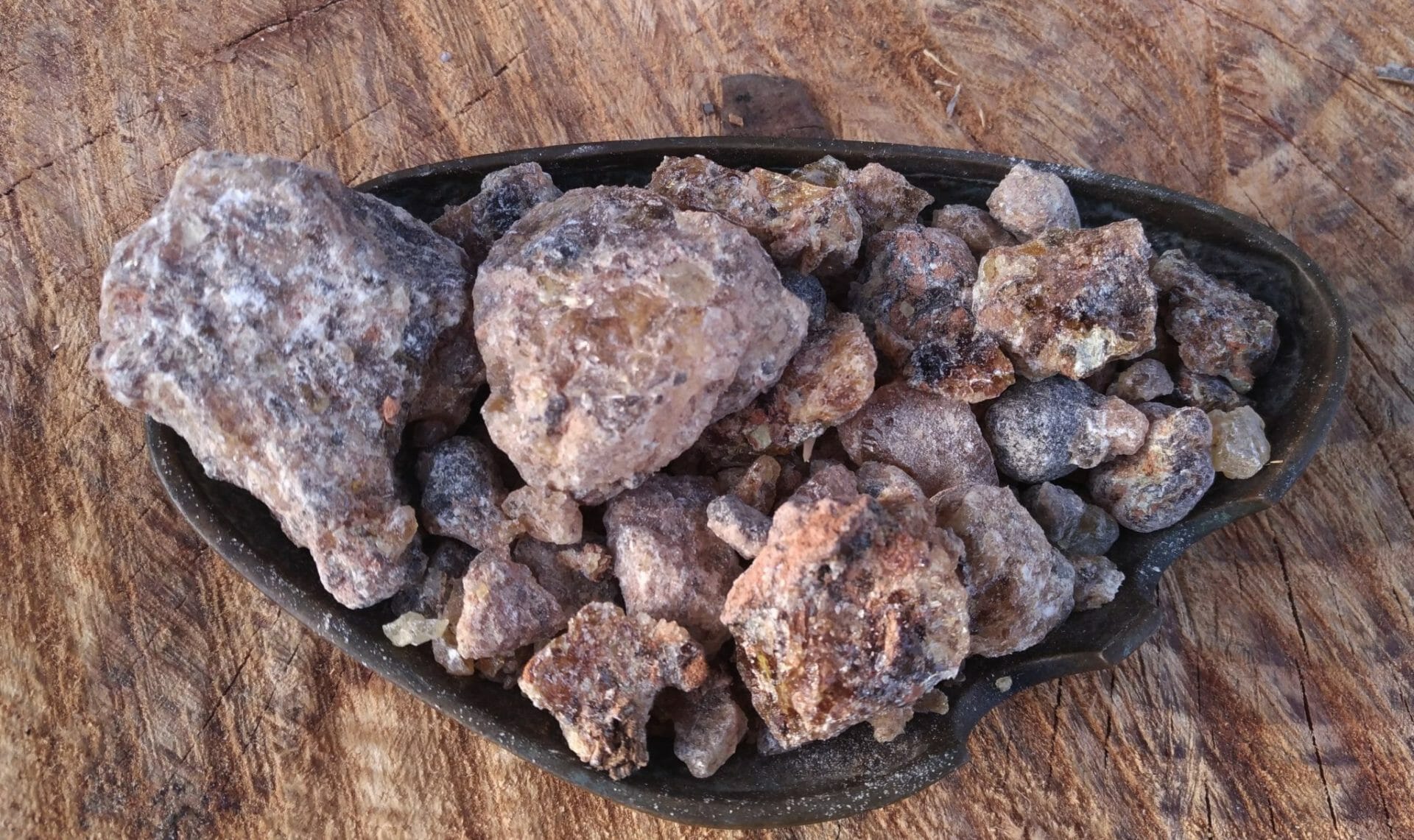 This shipment of “Light” Boswellia neglecta from the Barako co-op in Somalia was a surprise.
It was sent as part of a joint effort to take some of the pressure off the heavily tapped  Boswellia carterii and frereana trees and develop a market for the lesser-known species that share the mountains with them.

Diversifying the trade in resins gives harvesters and their communities a broader income base and a safety net in case the mainstream Frankincense and myrrh trees cannot be saved from their current decline. They are dying off, around the world, at an alarming rate from both environmental stresses and human folly. Something I will post about in depth shortly.

After hundreds, if not thousands of years of tending and harvesting Frankincense and Myrrh trees, these harvester communities have developed unique relationships, cultures, and traditions that are tightly woven with the trees. In many cases, up to 95% of their yearly income is generated from the collection and sale of these aromatic resins. If indeed their decline cannot be stopped, these communities will become displaced and seek new lives in towns and cities, losing their rich heritage and their ties with the land.

Diversifying their income could be a key factor in weathering the loss of Frankincense trees till reforestation and replanting programs are instigated and bear fruit which could take between 30 to 50 years. We need to start thinking about these things. 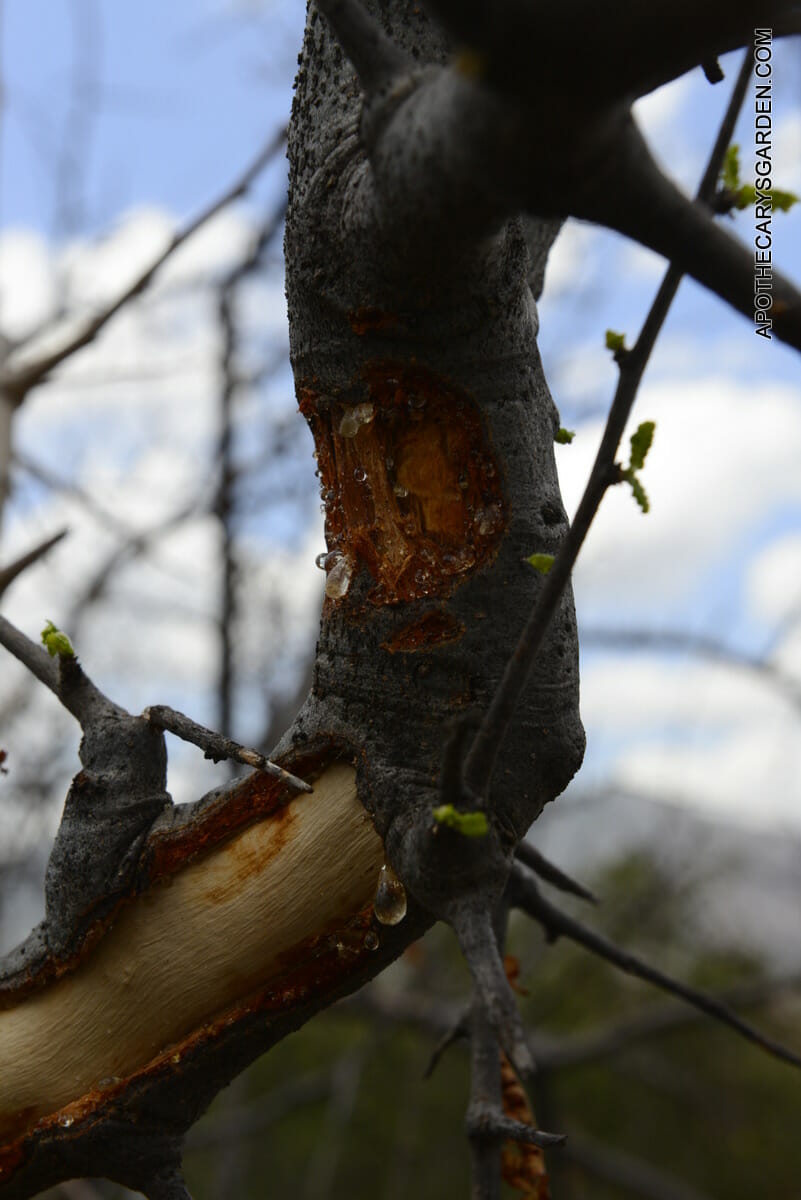 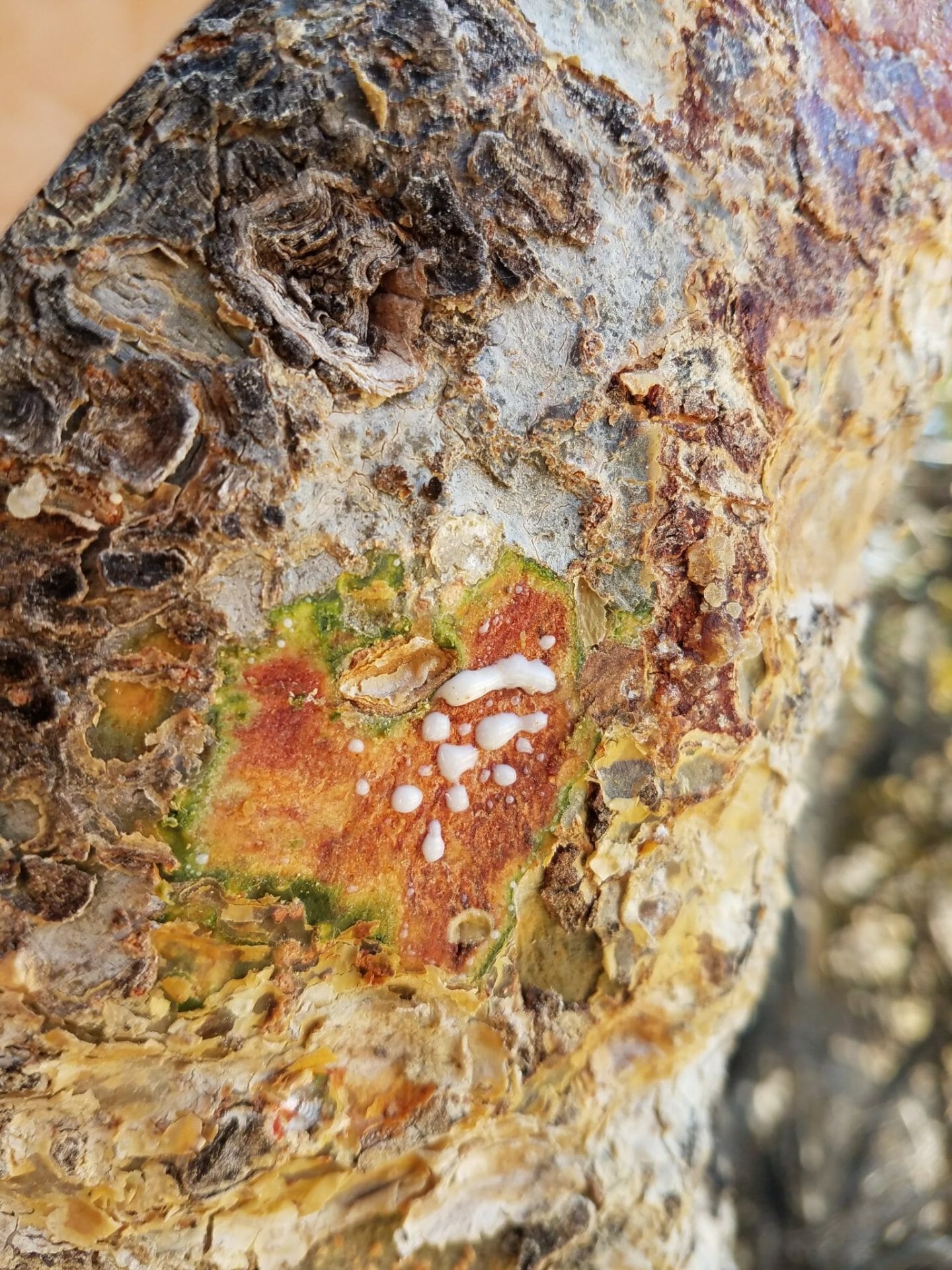 Our familiar Frankincense types are oleo-gum-resins and contain varying proportions of water soluble gum. This combination of gum and oleoresin exudes from the tree as a white emulsion which gives Frankincense its traditional names- Luban in Arabic and Levonah in Hebrew, both based on the Semitic root word “White”. The latin name for Frankincense, Olibanum and Oleum Liban in ancient Greek are both derivatives of this word. After thousands of years, we have come to associate all Frankincense species with this white exudate.

Surprisingly, Boswellia neglecta is an oleoresin with no water-soluble gum. It appears as clear golden droplets and thus, is not an Olibanum or Luban.

Not only does this “Light” B. neglecta differ from other Frankincense resins in colour and composition, but the honey coloured “Light” resin contrasts radically with the granular aromatic black resin produced alongside it on the very same tree which is commonly sold as Boswellia neglecta resin. Confused yet?

For these reasons, I felt we needed a proper name for the amber resin of Boswellia neglecta. It sounded grammatically grating and irritatingly unimaginative to call it “Neglecta Light” in the shop.

So, for the sake of clarity, linguistic aesthetics, and to more easily differentiate the “light from the dark, I have dubbed the resin formerly known as Boswellia neglecta “Light”- Boswellia neglecta Thurimellis, a Thurimel which means Frankincense Honey in Latin. I was considering the other Latin version, Tus melle, but that was too smelly.  I am taking artistic license with this.  I don’t know if I got the Latin declensions right, but I look forward to being corrected if this is the case…..

The scent of this Frankincense neglecta Thurimel from Somalia is more intense than the Kenyan variety. Though both share the same Amber Frankincense heart couched in sweet honey and soft musk, this variety is more vivid, fruity and citrusy than the Samburu Frankincense neglecta Thurimel. Other than the scent, it seems identical to the Kenyan variety in all ways. It is a pure oleoresin with no water soluble gum which means it melts cleanly into the charcoal as incense, and just as readily, dissolves into warm oils and waxes for the production of moustache waxes, oils, salves and cremes. It makes a unique perfume tincture and the infused oil of this Frankincense feels softening, nourishing and penetrating on the skin. I can only Imagine the fragrance of its distilled essential oil. It is on the top of my to-distill list. 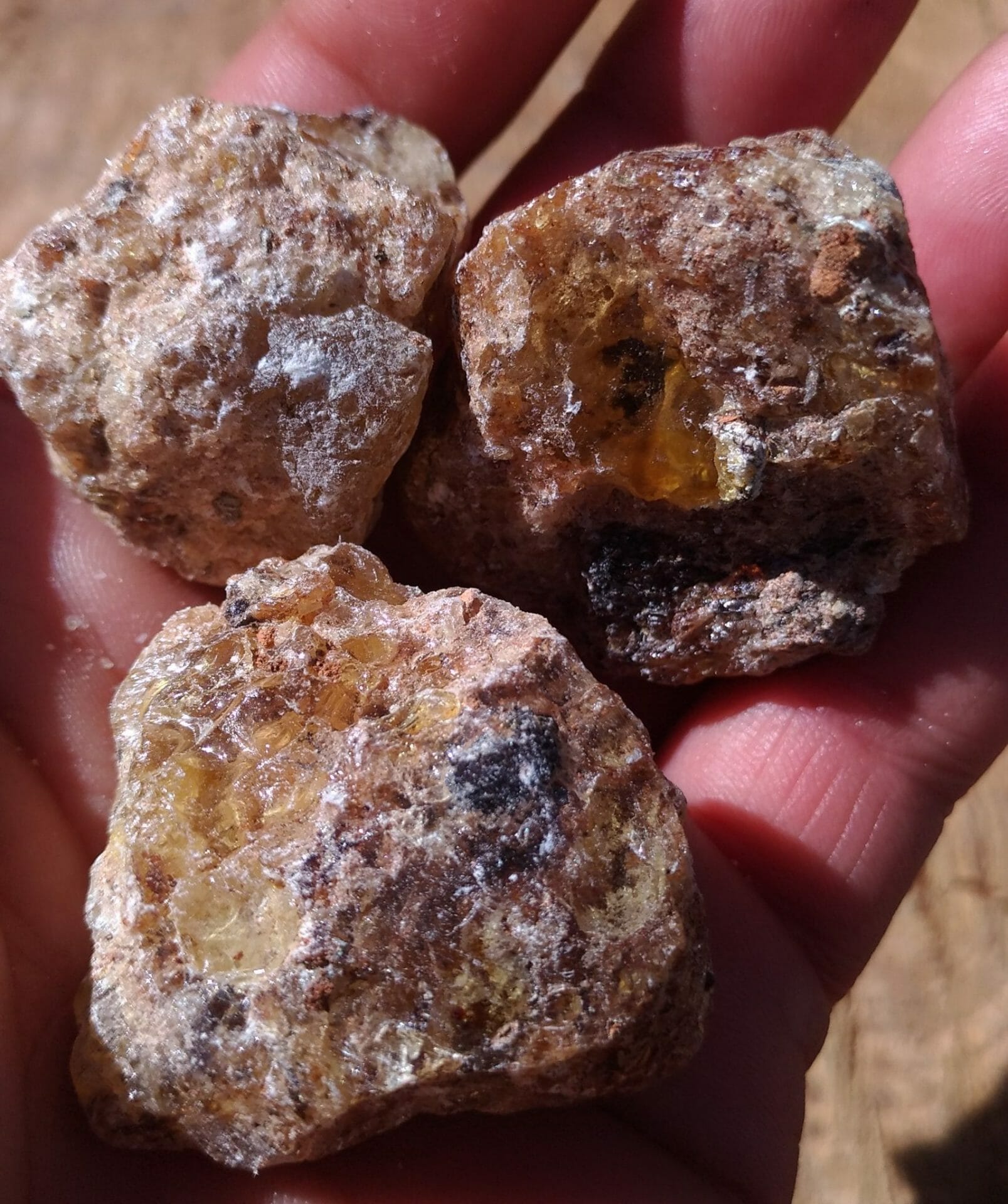 An introduction to Boswellia neglecta

The Boswellia or Frankincense neglecta resin of commerce is generally accepted as a dark, granular, blackish mass with a rich familiar Frankincense fragrance and a note of sweet Fir trees. l was convinced no tree could produce 2 resins so different in appearance. If I hadn’t seen it with my own eyes in Northern Kenya I would still be sceptical.

Initial injury to the tree generates a clear oleoresin which hardens translucent and light golden in colour. Subsequently, the tree creates traumatic resin ducts as do our Northern Spruce and Pines. These ducts generate a therapeutic compound called “Callus Resin” that acts as a bandage and promotes the growth of protective tissue that heals the wounds, creates “scar tissue” and isolates healthy tissue from diseased. I assume, that the presence of different chemical compounds lends a different fragrance profile to each of these oleoresins. 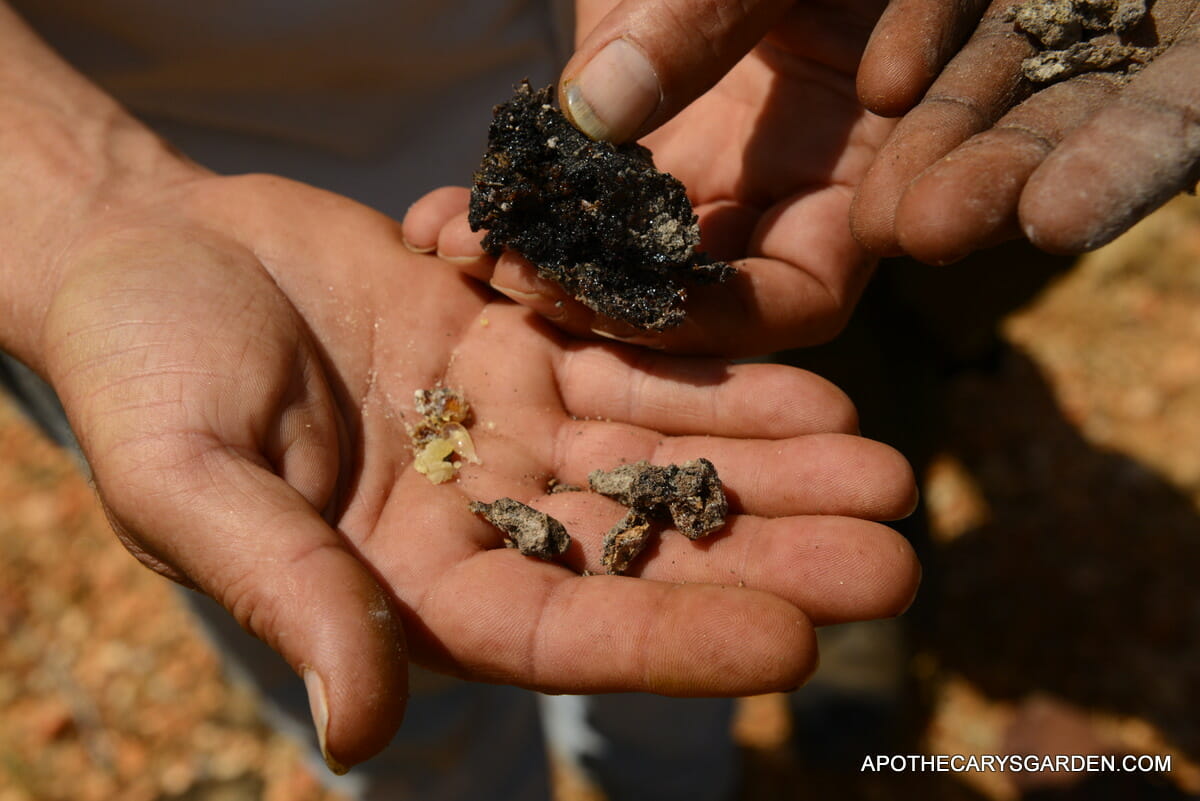 In Scandinavia, Spruce callus resin is used in traditional salves for slow healing wounds and diabetic ulcers. This is the type of Boswellia neglecta resin we are familiar with in the West. It is granular, fragrant, and often tar-like in texture and colour.
I prepare my Frankincense “Heartsease oil” from the dark neglecta which is used in massage to help reduce anxiety, panic, and tightness of the chest.

In Northern Kenya the Samburu women pick it off the trees in small tears which melt together in the 30-40 degree heat that accompanies most days in the bush. It is usually purchased as an aggregate in hardened lumps shaped by the women’s hands as they keep the light resin separate from the dark.

As all its brothers, Frankincense Neglecta is ruled by the Sun from an astrological point of view. It is calming and strengthening to both mind and heart, aids in meditation and concentration, and is thought to act as an aphrodisiac. It is assumed this oleoresin is composed of Boswellic (resin) acids, but I have yet to come across an analysis of the resin. It can be easily crushed and added to other materials when making incense blends and has a sweet, crisp, uplifting Amber fragrance.